This tutorial is an introduction to the world of iOS development using Apple's latest UI framework: SwiftUI

We'll be building a counter app, where the user will press a button and increment the number on the screen.

In order to work through this tutorial, you will need a Mac with Xcode 11 installed. Xcode 11 is the minimum version that supports SwiftUI. It is useful to have Mac OSX Catalina installed to see live previews in Xcode, but you can still use Mac OS X Mojave.

Download and install Xcode from the App Store. This may take a while — its a big program. If you are at a Codebar ask the coaches before downloading it from the App Store as they frequently have a copy on a USB drive which will save some installation time, but it would be better if you come to the workshop with it installed. 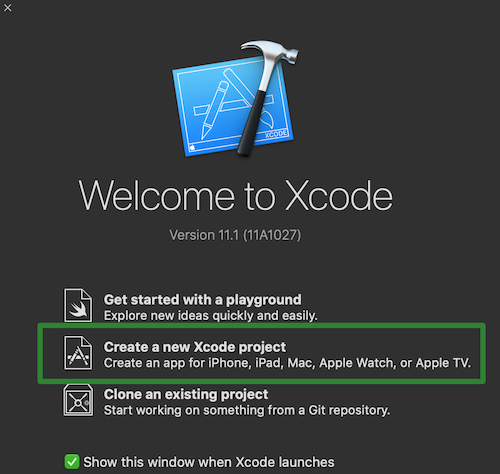 3. Fill in the project details:

Make sure Swift is selected as the language.

Make sure SwiftUI is selected as the User Interface.

Make sure the three boxes at the bottom are unchecked, we won't be using those options in this tutorial. 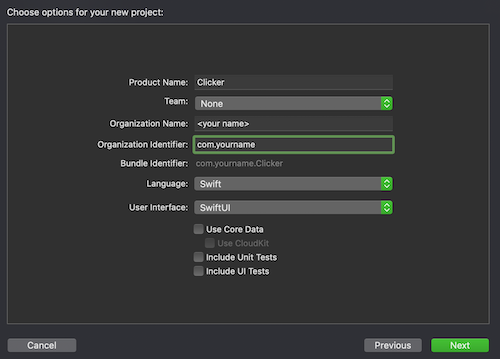 4. Select a sensible place to save your project, then hit Create.

Take some time to look around the project that's been created with your coach. What files are there? How do you run your app?

If you are running on Mac OS X Catalina, try running the preview to see what the default project provides.

If this is your first time running Xcode, then this may take a few minutes. This is normal, the next time you run the preview it will be much faster.

5. Open up the Navigation Area in Xcode, and then the ContentView.swift file and its associated Canvas.

If you click on the Resume button in the top right, and you are running on Mac OS X Catalina you will see a preview of the Hello World application that the template has provided for you.

6. Edit the Canvas and add a Button

When using SwiftUI the Canvas provides a live view of your code. Editing the Canvas will also update your code! We shall be adding code from the Editor a little later on, but for now just add a button to the canvas.

If you look at the Editor, you can see that this has created a VStack with both the label and the button. A VStack is a built in view that arranges the contained views vertically.

7. Run the app on the Simulator or the canvas.

You can either run the app in the simulator or use the live preview in the Canvas to see the visual effect of pressing the button.

Try changing the VStack to an HStack Are the results what you expect?

A HStack is a view that arranges its contained views horizontally.

However, it would be even more awesome if our button actually did something.

Make the Button do something

To do this we are going to need some state in our view.

8. Create some state for the view

Create a state variable at the top of the definition of ContentView. We make it private because it is internal to the view, and we give it a default value of false which implicitly makes showGreeting a variable that holds a Bool (Now is the time to ask your Coach questions).

We are going to use this to configure what is displayed on the screen.

9. Configure the view to display according to the state

Change the string that is displayed in the Text view depending on this state:

When showGreeting is true the label will display the greeting, otherwise it will be empty.

10. Use the Button's action to change the state

When you dragged the button onto the canvas it created an empty action This is a closure, and when the button is tapped it will perform whatever code is written in this closure. We are going to use this to toggle the showGreeting state.

Interlude: What is @State?

SwiftUI is a declarative framework. That means that you write the view to show different things according to its state, and actions change the state, and let the framework handle redrawing the views when these change. If you have done any iOS programming with UIKit before this will be very different. We don't update properties and tell the view to redraw; we just update the properties.

We can use normal constants and variables in SwiftUI, but when we use @State variables we are telling the framework that these are the values that the view depends on. SwiftUI keeps track of these internally, and when they change the view is redrawn.

11. Run the app in the Simulator or by using the Canvas's live preview feature

As you tap the button, the greeting appears and disappears!

This is not trivial. You have learned an important part of developing using SwiftUI. You create state, you write your view to respond to the state, and you have actions that change the state. The framework takes care of redrawing the view when the state changes.

If you have done any iOS development before, or even the other CodeBar tutorial, you can see how little code is needed. There are no ViewControllers. There are no Storyboards. You write code and see the results immediately.

There are two major tasks for making the counter app. Firstly, the functionality - getting the counter to increment on button clicks and showing the new number. Secondly the UI, getting an app that looks nice and is easy to use. This tutorial will create the functionality first and then move on to the UI. You may choose to tackle the tasks in the alternate order. Have a brief discussion with your Coach about the pros and cons of each approach.

We are a good way towards this, we already have a Button with an action, and a Text view that displays something.

Since the state is variable is now a number and not a string, change the Text view to display this:

Finally change the Button's action to increment this variable

13. Run the app in the Simulator on the Canvas live preview to see the counter working

Having the button and the label so close together isn't the nicest looking UI. Nor is it the easiest to use. And the text for the counter seems a little small. Let's fix these things

14. Increase the size of the numbers

In the canvas Cmd + Click on the Text view, this brings up an inspector.

Choose Large Title for the font.

Notice that in the editor, the modifier has been added to the Text view that matches this choice.

Working with your coach, try to apply other sizes and styles to this Text view.

Add a Spacer() above and below the Text view. The entire file should now look like this:

And the Canvas shows the result: 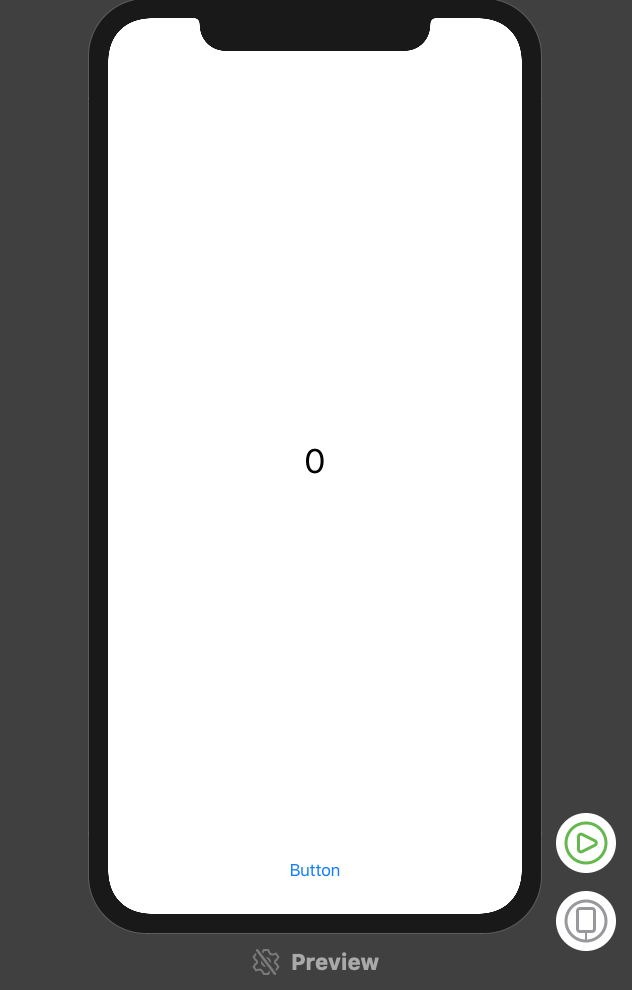 Congratulations! You've just created your first SwiftUI iOS app. You've learned how to move around Xcode and edit your code. You've added UI elements from the library and configured them. You've seen how to use previews, live previews, and the simulator. You've seen how SwiftUI is declarative. This is a good start!

Bonus : Run your app on your Apple device

Running your app in the simulator is cool, but you know what's even cooler? Running your app in your Apple devices! Couple years back, you need to have a developer account to run your app in a physical device, but luckily know Apple allows us to run our app using your everyday Apple account. 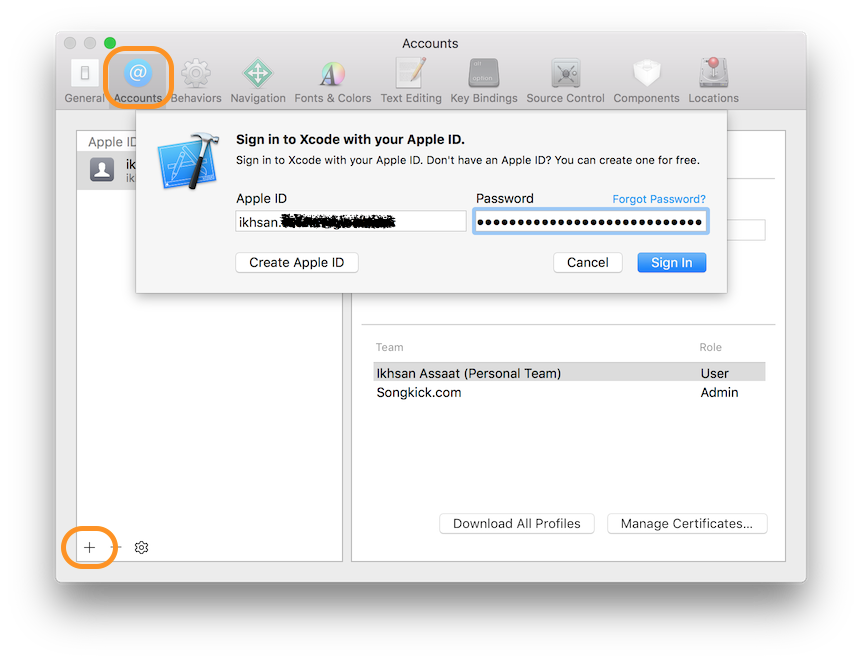 B. Configure your project's signing

It's great to see that Apple makes it easy for us to try our app in our actual hands. Happy testing!

If you've finished all of the above why not think about some of the following ideas: